Donating Royalties from Anthology to #FamiliesBelongTogether 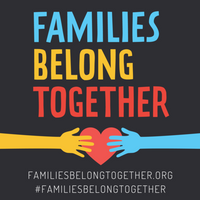 Like many, I've been watching in horror what's been happening to immigrant families crossing the border from Mexico into the United States. It's filled me with rage, disgust, and a sense of powerlessness.

Equally disgusting has been witnessing the slew of Americans justifying or otherwise rationalizing that separating parents from their children simply for fleeing dangerous situations in their home countries is somehow okay. It is morally reprehensible, and I will not associate with anyone who voices those opinions.

That includes the editor/publisher of a moderately popular anthology that I have story published in. I won’t name the editor because I have no desire to give them free publicity, but when I saw this editor write multiple social media posts justifying separating families, I knew there was something I could do about that.

As I mentioned in point 2 above, all of these are largely symbolic gestures, but that is largely the point. As a society, it’s important that we speak out against hate and intolerance, and then take whatever direct action we are individually able to. As a writer, this is what I can do: I can speak out, I can spread the word, and I can contribute a small financial sum to support people doing the hard work.

If you can do more, great, do it. There’s a call for immigration lawyers who can do pro-bono work. Familiesbelongtogether.org is organizing protests nationwide on June 30th. There’s a #ProtestICE movement if you want to participate in locking down every local ICE center across the nation (more info in this Twitter thread, and make sure you know the risks involved in this sort of protest). If you can donate money, this Slate article has a listing of worthy charities doing good work.

Do what you can and don’t stop until the President is gone, his cabinet is gone, ICE is dismantled, and those 2,000+ children are reunited with their families. #FamiliesBelongTogether